US kit removal from Afghanistan to cost $5-6 bn 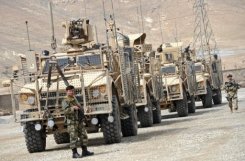 The US operation to remove military hardware and vehicles from Afghanistan as troops withdraw after 12 years of war will cost between five and six billion dollars, officials said Sunday.

Among statistics released by the military about the process known as a "retrograde" was that 25,000 vehicles have been shipped out of Afghanistan in the last year and another 25,000 remain in the country.

About 100,000 containers are also still in Afghanistan, and will be used to remove mountains of equipment ranging from fighting gear to fitness machines, furniture and computers.

"The retrograde from Afghanistan is one of the most challenging military transportation operations in history in terms of scale and complexity," Brigadier General Steven Shapiro said in an email.

"Our number of vehicles in Afghanistan has dropped by nearly half in the past year."

Shapiro, the commanding general of 1st Theater Sustainment Command, said decisions were being made on what equipment was left for the Afghan army and police to take on the fight against Taliban insurgents.

"Ground commanders are able to nominate this equipment as they assess the needs and maintenance capabilities of their Afghan partners and numbers will vary," he said.

"The figures of five to six billion dollars corresponds to the total cost of retrograde from 2012 through 2014, and they're constantly being reevaluated."

Most of the hardware will be flown out of land-locked Afghanistan or taken by road to the Pakistani port of Karachi, though the route has been hit by militant attacks and was temporarily closed by spats between Washington and Islamabad.