US to sell largest ever Hellfire missile cache to Iraq 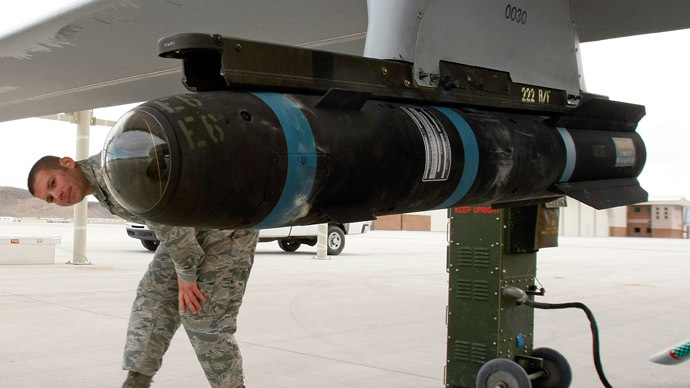 The United States is preparing to sell the Iraqi government 5,000 Hellfire missiles through a proposed $700 million deal intended to equip Baghdad with additional power as militants from the Islamic State continue to wage a campaign across the region.

On Tuesday, the US State Department issued a statement announcing the preliminary approval of an agreement that would give Iraq a new arsenal of AGM-114K/N/R Hellfire missiles and associated equipment, parts, training and logistical support “to help improve the Iraq Security Forces’ capability to support current on-going ground operations.”

The Washington Post reported that the deal, if cleared for approval, would constitute the largest shipment yet of Hellfire missiles to Iraq. Congress will first have to authorize the arrangement, butAFP reported that lawmakers are expected to green-light the deal as planned.

Rear Admiral John Kirby, a spokesperson for the Pentagon, added that the order is only the latest instance in which Washington has reequipped the Iraqi military with weapon power as the Islamic State, a militant group previously known as the Islamic State of Iraq and Syria, or ISIS, continues to mount a campaign against Baghdad that in recent months has allowed the insurgents to take hold of key towns across Iraq and contributed to the deaths of over 5,500 civilians so far this year, according to the United Nations.

The Pentagon has sent 780 Hellfire missiles to Iraq since this past January, Kirby told AFP, including 466 in the month of July alone after, according to the Post, the military went through around 300 of the warheads in June as ISIS escalated their campaign. In August, Kirby added, an additional 366 missiles are expected to be sent.

Lockheed Martin, the Maryland-based contractor that will provide the weaponry, describes Hellfire as “a combat–proven tactical missile system that can be launched from multiple air, sea and ground platforms” that offers “multi–mission, multi-target capability and precision–strike lethality.” An image made available by Jihadist media outlet al-Itisam Media on June 29, 2014, shows members of the IS (Islamic state) (AFP Photo)

Earlier this month, Bloomberg News reported that the State Department planned to ask the Obama administration to approve the sale of at least 4,000 new Hellfire missiles to Iraq. At the time, a State Dept. spokesperson told Bloomberg that “as a matter of policy, we decline to comment on cases that have not been formally notified to Congress.” The legislative branch has since been made aware of the offer, though, and now has 30 days to block the sale outlined in the notice published on Tuesday by the Pentagon’s Defense Security Cooperation Agency.

In the months since the Islamic State has ramped up its campaign to take over Iraq, US President Barack Obama has adamantly insisted that no American troops will engage in combat roles. So far, however, the commander-in-chief has sent at least 275 armed troops to Baghdad as a security precaution and ordered the deployment of hundreds of additional military advisers “to assess how we can best train, advise and support Iraqi security forces going forward.” Last week, Human Rights Watch asked the US to put any plans to send weapons to Baghdad on hold until the Iraqi government “complies with international law,” citing concerns about the illegal use of barrel bombs since a counter-campaign intensified early last month.