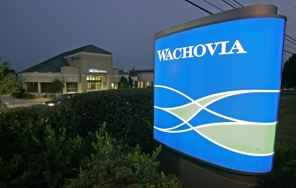 Wachovia Capital Markets cheated investors by charging inflated prices on securities tied to home mortgages, regulators alleged Tuesday. As the housing market weakened in 2006 and 2007, the transactions helped Wachovia avoid losses on assets that had declined in value, the Securities and Exchange Commission said, adding that the victims included a Zuni Indian tribal pension plan.

Wachovia has since been taken over by Wells Fargo, a unit of which settled with the SEC by agreeing to pay a fine of $4.45 million and to give up allegedly ill-gotten gains of $6.75 million. Much of that money will be returned to investors who were harmed, the SEC said. Wells Fargo neither admitted nor denied wrongdoing.

“The issues presented here were complex, and Wells Fargo is pleased to have resolved this matter with the SEC,” Wells Fargo spokeswoman Mary Eshet said.

Against the backdrop of the housing meltdown and the financial crisis, the SEC has been scrutinizing Wall Street’s sales practices involving a variety of complex financial instruments.

The Wachovia case illustrated the risks investors face when trading in relatively opaque corners of the financial markets — in contrast to, say, the stock market, where prices are publicly disclosed and continuously updated.

Investors may not be able to fully evaluate some highly complex transactions “based on the lack of transparency in price and terms,” said Lorin L. Reisner, deputy director of the SEC’s enforcement division.

The law Congress passed last year in response to the financial crisis calls for greater transparency in the trading of certain derivatives.

Those prices were 70 percent higher than the value Wachovia had given the investment for accounting purposes, the SEC said.

In the sale of another CDO called Longshore 3, Wachovia told investors that collateral was acquired “on an arm’s-length basis” and “at fair-market prices,” but those statements were not true, the SEC said.

Wachovia had transferred the assets from an affiliate at above-market prices to avoid losses on its own books, the SEC said.

The case is not the first the SEC has brought involving CDOs, which played a major role in the financial crisis. In a case last year against Goldman Sachs, the SEC said Goldman let a hedge fund that was betting against a CDO help choose assets for inclusion in the CDO. Goldman agreed to pay a $550 million penalty. It neither admitted nor denied wrongdoing but expressed regret.