Wars made to experiment on wounded soldiers Life Extension Tech, Transhumanism and the Elite. 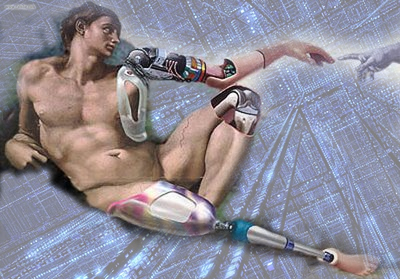 Have you ever thought about war in a deep prospective,well the elites have and now they  are going to put wars around the world in  different uses.We are now entering a new way for us in years to come .

Think about why in the dark ages men in war use plated armor but our solders now days don't use any armor when we have technology thousands times greater.

In history the elites buy slaves then put them to work or war to protect their assets,and now its beyond sick they are willing to use us as guinea pis for the trans human agenda..Its not freedom we are fighting for its depopulation and bionic experiments . http://www.ign.com/articles/2000/01/27/bionic-commando-2

Lots of internet and console games teach kids the trans humanism way by letting them see what its like in war and prep them to join  the armed service in the wrong way .

Deep down inside of my being, I’m an idealist. You would not think so after reading some of my posts and comments on other blogs, you’d believe that I come across as one cynical arsehole. And you’d be correct. But as a fan of science-fiction, science, space travel and futurism, I still carry that spark of idealism of an eleven year old boy. And it won’t die. I’ve tried to kill it often, but it refuses to give in and go away.

This is important when it comes to transhumanism and the future. One must be an idealist to face a future that is scary and daunting for 95% of the human race. So when it comes to transhumanism (definition) I believe I have an inside track on that because without advanced cardiac technology, my quality of life would have been greatly diminished, or I might not be here at all sharing this with you. Some adherents to transhumanism believe it is only a step toward becoming post-human (definition), which is something altogether different and very radical. Being post-human isn’t a goal of mine. The concept of being “god-like” or a demi-god doesn’t appeal to me. I’m pretty conservative when it comes to certain things, being human is one of them. I just wanted to live long enough to live Star Trek and command a starship!

There are many concerns and dangers when it comes to life extension and other transhumanist technologies, it can be misused directly out of hand and by some not very nice people:

“The development of successful life-extension technologies will be a reality within 30 years, but the application of such stunning advances will be tightly restricted by a ruling elite, and eventually may be used as a justification to completely wipe out humanity, according to some of the scientific community’s leading pioneers.

A recent article carried by the Methuselah Foundation, an organization that advocates the development of life extension and nanomachinery technology, concludes that life-extension technology and “(greatly) augmenting our biology with nanomachinery” will have arrived by the 2030′s, but that “The new bio- and nanotechnologies of the 2040s will be massive overkill for the “simple” task of repairing the damage of aging.”

The report concludes that the greatest obstacle in the field is not the development but the application of such technology, suggesting that living for hundreds of years is inevitable only for the wealthy elite…”

Paul Watson is making a very valid point here, since the elite has most of the money, they are doing most of the funding for the research. And it makes alot of sense for them to do this because most of them believe they are gods or descended from gods. Some even claim Egyptian  pharaonic ancestry. Think I’m nuts? Read Michael Tsarion sometime, he has the skinny on the historical stuff. You might be thinking that you need the tinfoil when you read or listen to this guy, but his take is a combination of alien visitation and the divine. Cool stuff.

I have done quite alot of soul searching after doing research into the workings of the NWO, the people, the lies, the murders, genocides and media manipulation that’s employed. It is indeed possible and very probable that the elite are planning a Matrix style existence for Mankind for the sole purpose of bleeding us dry of our life energy to supply their cold, emotionless and souless lives. It’s almost that now, sans virtual reality (but how do we know that?).

But damnit, that idealistic eleven year-old kid keeps sticking his nose in there saying “I want that therapy so I can command a starship someday!” *sigh*