‘We won’t sell our healthcare’: Madrid rallies against privatized medical 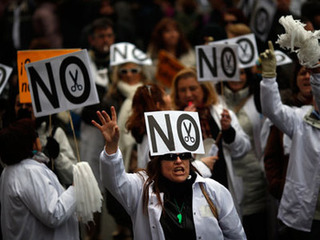 Thousands swarmed the streets of Madrid enraged at a bill to privatize public hospitals as part of sweeping cuts. The ‘white tide’ of protesters slammed the measure as ‘politically motivated’ and putting the Spanish health system in jeopardy.

Most of the participants of the mass rally were dressed in white, which has come to be known as one of the trademark features of the so-called white tide protests. The protesters began their second march of the year at Plaza de Colon, parading through the center of Madrid under the slogan: “You don’t sell healthcare, you defend it.”

They called on politicians to reverse the controversial bill that will sell off 10 public hospitals and 10 per cent of health centers to private enterprise to deal with Spain’s crippling deficit.

“The quality will worsen, you cannot manipulate public health to your advantage, the desire to make profit should not being governing the health system,” said Spanish nurse María José del Pozo to Reuters.

The Spanish government maintains that the cuts are necessary to combat Spain’s rising national deficit. The conservative People’s Party who took power in last year’s elections intends to cut 2.7 billion euro from the 2013 budget to reduce public debt to 0.7 per cent of GDP from 1.5 per cent last year.

Medical student David Carmona (L) sings a song defending public healthcare with another demonstrator as they protest outside the Spanish Health Ministry against the local government's plans to cut public healthcare spending in Madrid.(Reuters / Susana Vera)

Of the proposed cuts, the executive plans to make around 553 million euro to the health sector.

Spain’s medical association has taken issue with the government’s numbers and states that the cost of running public hospitals is not greater than the running-costs of private institutions. Additionally, they have argued that private hospitals concentrate more on short-term, less serious illnesses, which allows them to get better results with fewer resources.

More than a hundred members of the management body of Madrid’s health centers have handed in their resignations after the bill was passed and there have been various calls for medical staff to go on strike from Monday 14.

Madrid’s Health Minister Javier Fernandez Lasquetty has criticized the protests for “having nothing to do with the interests of Madrid’s citizens.”

“These are disputes between medical syndicates for their own interests and at the price of the medical aid for the people of Madrid,” said Fernandez Lasquetty.

The Spanish government’s desperate measures to cut back on spending in an attempt to reduce public deficit amid a double-dip recession have been met with increasing public ire.

Healthcare workers and supporters raise their hands as they take part in a protest against the local government's plans to cut public healthcare spending outside's Spain's Health Ministry in Madrid.(Reuters / Susana Vera)
http://rt.com/news/spain-protest-health-service-932/print/