What is Your New Year's message to Washington? The fiscal cliff is nigh; Senators talk deal, House won't vote! 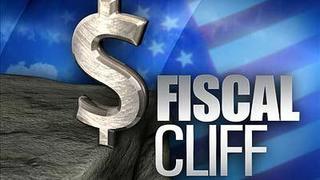 The feared fiscal cliff was at hand Monday night, with senators discussing a deal struck by their leaders and no vote in the House of Representatives scheduled before a combination of tax increases and spending cuts starts to kick in.

After a day of negotiations among Senate leaders and the White House, Vice President Joseph Biden headed into a meeting with Senate Democrats on Monday night to pitch a deal to avert at least part of that combination, a Democratic source said. Arizona Sen. Jon Kyl, the Republican whip, told reporters earlier that a "notional agreement" had been reached, but was "not necessarily formalized."

But the House of Representatives adjourned without voting on anything -- and earlier remarks by President Barack Obama that chided Congress and warned that battles over spending still loomed, hit a nerve among several Republicans in the Senate.

"They are close, but they're not there yet," Obama said. "And one thing we can count on with respect to this Congress is that if there is even one second left before you have to do what you're supposed to do, they will use that last second."

The Bush administration's 2001 and 2003 tax cuts are set to expire at midnight Monday, and steep spending cuts set into law during the 2011 standoff over raising the federal debt ceiling start to kick in on Wednesday. Economists warn that could push the U.S. economy back into recession and drive unemployment back over 9% by the end of 2013.

Obama said the plan on the table would prevent a tax increase for the overwhelming majority of Americans, extend the child tax and tuition credits for families, extend credits for clean-energy companies and extend unemployment benefits for 2 million people. But he said lawmakers still have to figure out how to mitigate the impact of the planned cuts.

And he warned that if Republicans think they can get future deficit reduction solely through spending cuts "that will hurt seniors, or hurt students, or hurt middle-class families without asking also equivalent sacrifice from millionaires or companies with a lot of lobbyists ... they've got another think coming."

That irked Republican senators who have been grappling for a deal with the Democratic majority in that chamber. Sen. Bob Corker, R-Tennessee, called the president's comments "very unbecoming of where we are at this moment" and added, "My heart's still pounding."

"I know the president has fun heckling Congress," Corker said. "I think he lost probably numbers of votes with what he did."

And Sen. John McCain said Obama "sent a message of confrontation to Republicans" with his remarks.

"People have to wonder whether the president really wants issue resolved, or is it in his short-term political benefit for us to go over the cliff," said McCain, R-Arizona.

Read more: Why your paycheck is getting smaller, no matter what

A source familiar with the negotiations said the proposals under discussion would generate $600 billion by ending the Bush-era tax cuts on individuals with incomes above $400,000 and families over $450,000. The top tax rate would return to 39.6% from its current 35%.

The deal would also increase the estate tax to 40% from the current 35% level and cap itemized deductions for individuals with incomes above $250,000 and household income over $300,000, the source said.

In the House, GOP sources said there's little practical difference in settling the issue Monday night versus Tuesday. But if House Republicans approve the bill on Tuesday -- when taxes have technically gone up -- they can argue they've voted for a tax cut to bring rates back down, even after just a few hours, GOP sources said. That could bring some more Republicans on board, one source said.

Read more: What if there's no deal on fiscal cliff

Earlier, a GOP source told CNN that the sticking point in talks was $24 billion in spending cuts being sought by Republicans in place of the $110 billion in automatic spending now set to take effect.

As Monday's deadline drew nigh, federal agencies were preparing for the possibility of furloughing workers. At the Pentagon, a Defense Department official said as many as 800,000 civilian employees could be forced to take unpaid days off as the armed services face an expected $62 billion in cuts in 2013 -- about 12% of its budget.

Those workers perform support tasks across the department, from maintaining aircraft and weapons systems to processing military payrolls and counseling families. The Pentagon believes it can operate for at least two months before any furloughs are necessary, but has to warn its civilian workforce that furloughs could be coming, the official said.

The White House budget office noted in September that sequestration was designed in 2011 as "a mechanism to force Congress to act on further deficit reduction" -- a kind of doomsday device that was never meant to be triggered. But Congress failed to substitute other cuts by the end of 2012, forcing the government to wield what the budget office called "a blunt and indiscriminate instrument."

Despite Obama's backing, one leading Senate Democrat warned a deal could run into trouble -- not only from House Republicans who have long opposed any tax increase, but also from liberals in the Senate who oppose allowing more high-income households to escape a tax increase.

"No deal is better than a bad deal, and this looks like a very bad deal the way this is shaping up," Sen. Tom Harkin, D-Iowa, said.

Conservative lobbyist Grover Norquist, whose Americans for Tax Reform pushes candidates to sign a pledge never to raise taxes, said the plan "right now, as explained" would preserve most of the Bush tax cuts and wouldn't violate his group's pledge.

"Take the 84% of your winnings off the table," Norquist told CNN. "We spent 12 years getting the Democrats to cede those tax cuts to the American people. Take them off the table. Then we go back and argue about making the tax cuts permanent for everyone."

But Robert Reich, who served as labor secretary in the Clinton administration, said the $450,000 threshold "means the lion's share of the burden of deficit reduction falls on the middle class, either in terms of higher taxes down the road or fewer government services." In addition, he said, the plan does nothing to raise the federal debt ceiling just as the federal government bumps up against its borrowing limit.

And that, McCain told CNN, is likely to be "a whole new field of battle."

"We just added 2.1 trillion in the last increase in the debt ceiling, and spending continues to go up," McCain said. "I think there's going to be a pretty big showdown the next time around when we go to the debt limit."