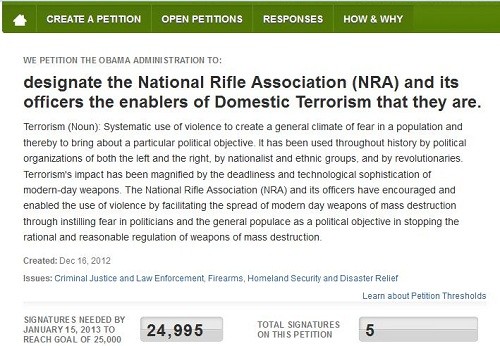 Two petitions at the White House web site demand that the NRA be designated a terrorist organization for supporting the Second Amendment right to keep and bear arms,Twitchy reported Saturday.

Federal law (18 USC §2332a) defines weapons of mass destruction as:

“(A) any destructive device as defined in section 921 of this title (i.e. explosive device);
(B) any weapon that is designed or intended to cause death or serious bodily injury through the release, dissemination, or impact of toxic or poisonous chemicals, or their precursors;
(C) any weapon involving a biological agent, toxin, or vector (as those terms are defined in section 178 of this title)(D) any weapon that is designed to release radiation or radioactivity at a level dangerous to human life.”

"WMD is often referred to by the collection of modalities that make up the set of weapons: chemical, biological, radiological, nuclear, and explosive (CBRNE). These are weapons that have a relatively large-scale impact on people, property, and/or infrastructure," the FBI says.

So far, the NRA has not endorsed the purchase or use of such devices, but to those Rush Limbaugh has called "low-information" individuals, such facts do not seem to matter.

"The NRA's advocacy of violence for ideological reasons places Americans at an unreasonable and unacceptable risk of death," the petition adds.

Neither petition has attracted many signatures. One has collected 17 signatures out of the 25,000 needed for White House action, and the other has garnered five.

Nevertheless, Twitchy says, the sentiment among anti-gun liberals is "there," based on tweets the site collected.

"And Walmart is the largest merchant of death in the country - with ties to the terrorist NRA. The NRA is America's Taliban," one person tweeted.

"Greatest terrorist threat to the United States....the NRA," added another.

"@rudepundit until we can call the NRA what they really are a terrorist group and treat like a true terrorist group they will always kill," tweeted "Kelly C," implying that NRA members should be killed.

"Time to declare wayne LaPierre a #Terrorist and #NRA a Terrorist organization (sic)," another person tweeted.

Since the tragic Newtown shootings, unhinged liberals, including a member of the Texas Democratic Party Executive Committee, have called for the murder of NRA members and supporters.

Meanwhile, a petition calling for the deportation of CNN host Piers Morgan has collected over 15,000 signatures.

which indicates any lunatic liberal moron can create a petition ... we're still waiting to hear an official response on the hundreds of thousands of signatures concerning secession