Who understands that people kill people, not guns. 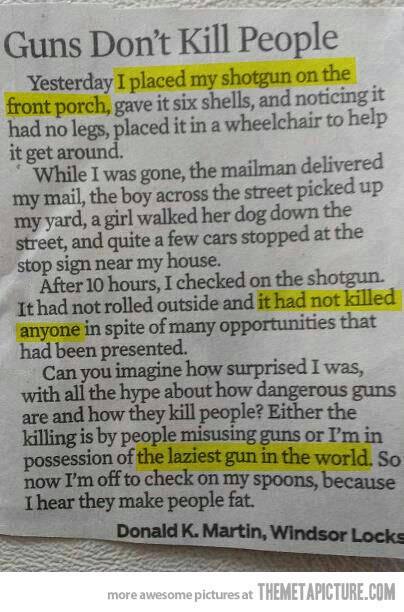 Haven't written an essay in a long, long time. This pic from my friend Pam Vredenburg prompted me to action.

This pic is from one of my rational CT neighbors who understands that people kill people, not guns.

People will use whatever means they have at their disposal to kill if they want to kill, not just guns. Any time a gun is used in a crime, (so long as it wasn't committed by an illegal immigrant or identity political group like minorities, for instance,) there is an endless rallying cry for "gun control' from these ideological subversives, who I, and anyone who has studied history recognize as the true fascists and enemies of freedom. It explains why gun control fetishists never target the abundance and trafficking of illegal guns, but rather target law abiding gun owners. That is a recipe for totalitarianism that has played out time and time again throughout history. Today's hipster Communists/socialists claim, they will be different. Because they are so kind and loving and compassionate. History and human nature beg to differ. Power corrupts and ultimate power corrupts ultimately.

These facts should unnerve us all if we TRULY value life and freedom.

How can you give power to people who wish to use their power to force others into submission, confiscate freedom and prosperity to achieve their aims, rather than gain and maintain power by doing the will of the People?

This is why we need guns. To protect us from those sort of tyrants, who would subvert Our Constitution for their own political goals. That is why only tyrants despise the US Constitution.

Guns kill about 37K people per year. About the same as car accidents. Abortions kill 500,000 unborn children per year in this country alone. Seeking medical treatment is the 3rd leading cause of death in this country (440K) LOOK IT UP! What is wrong with this picture?

Governments kill. Democide is the leading cause of death worldwide in the last 150 years. The vast majority of Most of killed by government have been under communist or socialism regimes. Fact.

People kill. They kill strangers, friends, lovers, spouses and even their own children. Especially if they are scorned, mentally ill, or on psychotropic drugs. If they want to kill, they will use guns, knifes, forks, vehicles, their own hands, credit cards, rocks, bricks, ovens, fire, gas, ropes, bombs, drugs, poison, etc. (you get the point?) And yes, abortion is killing as well, but some still try to use "moral relevance" as a defense for murdering the unborn.

As if it is ok and justifiable to kill the unborn, so you can continue college or lead a more "rewarding life" free from the burdens of motherhood. Really? Actions have consequences. Abortion is justifying (mostly) bad behavior, stupidity or both.

These souls claim motherhood is not a rewarding life? No, not to Malthusian eugenicists like racist KKK sympathizer and liberal icon Margaret Sanger, admirer of Adolf Hitler and founder of Planned Parenthood who called blacks and Jews, useless weeds. Yet, if you kill a pregnant woman you are charged with 2 murders. How is that for an example of double standards? Like corrupt politicians getting away with murder (literally) while "commoners" have the book thrown at them.

We have a spiritually sick society that puts little value on life, but full value on having a good time, and following the paths of least resistance. A sad, historical fact that I have seen right before my very eyes occurring in my own lifetime.

America has a generational welfare, single parent, broken home problem in this country, not a gun problem. Too many claim to be tolerant peace lovers, when they are in fact intolerant authoritarian souls consumed by violence and hate.

These are also the same folks, who, like the National Socialists, Stalin, Mao Pol Pot and countless other totalitarians since the CFR global banking elite began using Marxist theorem for world domination of economies and political systems want to ban guns. Know your history.
REAL history, not what was indoctrinated into you in school.