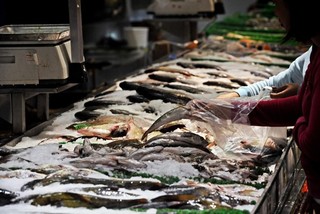 A study released by the ocean-conservation group Oceana reveals that consumers in the United States often purchase fish that has been mislabeled. If you order tuna at a D.C. restaurant, chances are half the time you’ll be getting another, less expensive fish in its place. But those odds are better than if you had wanted snapper. Testers nationwide found that 87 percent of the time, restaurants and grocery stores were selling something else under that label.

As much as one-third of seafood sold in restaurants and groceries is fraudulently labeled, according to a report the advocacy group Oceana released Thursday. The group sampled 674 retail outlets in the District and 20 states between 2010 and 2012, often finding cheaper, farmed fish being sold in place of wild-caught ones.

Ninety-five percent of the sushi restaurants, 52 percent of other restaurants and 27 percent of grocery stores surveyed sold mis­labeled seafood. While academics,consumer groups and media outlets in the United States and elsewhere have scrutinized fish labeling before and found major errors, Oceana’s effort is one of the largest seafood investigations to date.

In its study, Oceana did not mention the names of the food stores, restaurants and sushi houses it visited because the group cannot identify specifically where in the distribution chain the fraud occurred. If you ask those in the fish business, they likewise have different ideas on where the mislabeling begins. 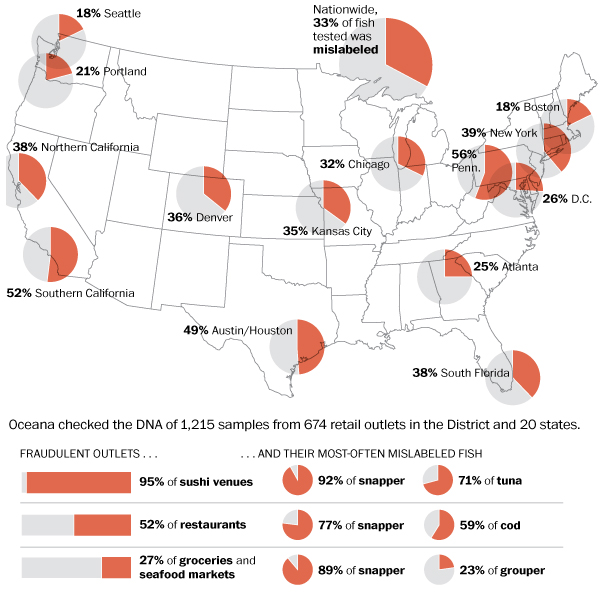 Bob Kinkead, the veteran chef and restaurateur behind such seafood emporiums as the recently shutteredKinkead’s, said the deception can occur anywhere along the distribution chain but notes that some suppliers prey on ignorant chefs. “I think chefs are uninformed” on species of fish, said Kinkead, who recently opened ­Ancora in the Watergate. “It’s not dishonesty. It’s carelessness.”

Darren Lee Norris, co-owner of Kushi Izakaya & Sushi near Mount Vernon Square, however, pointed a finger directly at restaurateurs. “I think it comes down to a restaurant or chef who’s trying to buy something cheaper and jazz it up and call it something else.”

The technology to conduct species tests has become relatively inexpensive and widely available in recent years, said Prof. Mahmood Shivji of Nova Southeastern University in Fort Lauderdale, Fla., who has conducted genetic testing on fish species since 2007 and advised Oceana on its study.

Although agencies such as the National Oceanic and Atmospheric Administration (NOAA) have genetics laboratories, Shivji said, “they are really bogged down. They don’t have enough personnel, the workload is huge and they don’t have the money” to conduct routine tests.

The Food and Drug Administration tests less than 1 percent of seafood sold in the United States for fraud, according to a 2009 Government Accountability Office report.

He said purveyors are much more likely to inflate the weight of the seafood they’re selling, by adding water. Inspectors have found inaccurate weight counts 40 percent of the time, Wilson said.

Still, Wilson said that fraud was more likely to occur with certain high-value species, including red snapper and grouper. Restaurants and supermarkets frequently substituted tilapia and other cheap species in the place of red snapper, Oceana found.

And most of the time sushi restaurants were passing off escolar as “white tuna,” which is technically not even a fish but a descriptive name for albacore tuna sold in a can. When consumed in large quantities, escolar can cause diarrhea. Though they don’t condone the mislabeling, some in the fish business say there’s a reason escolar frequently gets called “white tuna” in restaurants and sushi houses.

“I feel that white tuna has been used as a market name for escolar in cookbooks and on menus for decades,” noted John Rorapaugh, director of sustainability and sales with the Washington, D.C.-based supplier ProFish. “In this case, the name substitution is for familiar­ity sake and not to blatantly deceive the public — unlike the case of substituting a less expensive fish for snapper for financial gain.”

Writing a sushi menu is tricky business, said Kaz Okochi, chef and owner of Kaz Sushi Bistro in downtown Washington. With the right marketing name, a piece of fish can “start selling overnight,” Okochi said. He brings up the case of the Patagonian toothfish, which few diners ate until it was given the market name of Chilean sea bass, which soon becameoverfished. The fish Okochi buys from Japan sometimes come with names unfamiliar to American diners. So he has historically devised his own menu names.

“If it’s not really named in the United States,” Okochi said, “I think it’s okay to name it.”

Okochi and others say there is a difference between such a marketing practice, which typically involves a pricey piece of fish in the first place, and the outright fraud of substituting a cheap fillet of tilapia for the expensive red snapper. Some chefs believe that it’s the cheaper strip-mall sushi houses that perpetuate the vast majority of the fraud, in large part because they must rely on fish sales to support the business rather than a bar program or some other revenue streams inside the restaurant.

Some are pushing for reforms that would make it harder for chefs, restaurateurs and distributors to mislead the public. Some government officials and companies are pushing for increased traceability, where each fish receives an ID number that is carried over with each invoice, allowing buyers and customers to see where it is caught by logging onto a Web site.

Steve Vilnit, fisheries marketing director for the Maryland Department of Natural Resources, said he has been talking with the state’s fishermen about whether they would adopt such a system.

“Chefs are willing to pay a little more for that level of detail,” Vilnit said, adding the idea has sparked mixed reactions. “Some are very enthusiastic; others just want to do status quo. We’ll probably start out working with a small group of guys and expand it from there.”

Over at ProFish, they’re not waiting on the government to launch a traceability program. The company recently hired a firm to start conducting DNA tests as part of ProFish’s three-year-old FishPrint traceability program. ProFish’s goal is to, within a month, launch a Web-based database so buyers can see for certain what kind of fish they’re buying; the company will start with the top 20 species, such as salmon, catfish and rockfish. “We don’t want to go too big too fast,” said Rorapaugh. “You want to make sure you work out all the kinks.”

Such programs could help with assessing fish stocks. While many retail outlets swapped out depleted species for more plentiful ones, Oceana’s Stop Seafood Fraud campaign director, Beth Lowell, warned this gave Americans a false impression of how these stocks are doing. The Gulf of Mexico red snapper population will not reach healthy levels until 2032, according to NOAA, while red snapper in the South Atlantic won’t be rebuilt until 2047.

“If you see red snapper on every fish counter, on every menu and in every sushi restaurant, it’s hard for both managers and average consumers to understand the long road to recovery that red snapper’s on,” Lowell said.