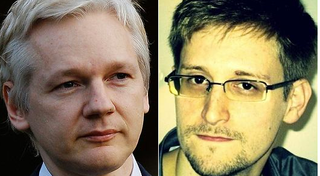 Just when WikiLeaks seemed to be fading from the world of spilled secrets, Julian Assange’s group has become part of the story of another megaleaker: Edward Snowden, the 29-year-old whistleblower currently flying across the globe to escape an Espionage Act indictment for revealing the biggest National Security Agency scandals of the decade.

On Sunday, Ecuadorean Minister of Foreign Affairs Ricardo Patiño Arocarevealed in his Twitter feed that Snowden has applied for asylum in..., following his departure from Hong Kong on a flight to Moscow. He’s accompanied by WikiLeaks’ British staffer Sarah Harrison, and WikiLeaks has issued a statement saying that Snowden asked the group to “use its legal expertise and experience to secure his safety.”

“The WikiLeaks legal team and I are interested in preserving Mr Snowden’s rights and protecting him as a person,” adds Julian Assange’s lawyer and former Spanish judge Baltasar Garzon in that statement. “What is being done to Mr Snowden and to Mr Julian Assange – for making or facilitating disclosures in the public interest – is an assault against the people.”

Snowden’s move to take refuge in Ecuador comes just two days after the United States unsealed charges against him for “theft of government property,” “unauthorized communication of national defense information,” and “willful communication of classified communications intelligence information to an unauthorized person,” crimes that carry up to 30 years in prison. Over the last weeks, the young former Booz Allen Hamilton employee has given the Guardian and the Washington Post a series of highly classified documents revealing everything from an order demanding millions of Americans’ cell phone records to a program for accessing data collected by Google, Apple, Facebook and Microsoft to the secret rules the NSA uses to determine when it can surveil Americans’ data.

The Ecuadorean government, despite its mixed record on press freedoms, has proven to be a friend of WikiLeaks and Julian Assange, who has lived in its London embassy for more than a year since seeking asylum to avoid extradition to Sweden for questioning on sexual misconduct. In an interview on Julian Assange’s talk show last year, Ecuadorean President Rafael Correa expressed his support for both Assange and WikiLeaks and described their leak of U.S. State Department cables as a positive event for Ecuador. “Cheer up!” he told Assange at one point during the show regarding the Swedish attempts to extradite him. “Welcome to the club of the oppressed!”

Snowden had previously mentioned seeking asylum in Iceland, which has also served as a past refuge for WikiLeaks. But despite reports that WikiLeaks was working to charter him a flight to the country, Icelandic legislator and former WikiLeaker Birgitta Jonsdottir warned in a statement that “Snowden should not come to Iceland unless he will request and be granted citizenship by the Icelandic Parliament.” She added that “it is important to note that Iceland has a terrible track record when it comes to granting political asylum to people seeking shelter, as it is hardly ever granted and thus a too dangerous path to be recommended for Snowden.”

As the controversy over his leaks has grown, Snowden has come to be seen variously as a betrayor of America’s national security interests or a conscientious objector to the NSA’s massive global surveillance. Former Vice President Dick Cheney has called Snowden a “traitor,” and in a congressional hearing earlier this week NSA Director Keith Alexander described his disclosures as having done “significant and irreversible” damage to national security. Meanwhile, more than 100,000 people have signed a petition on Whitehouse.gov requesting Snowden receive a presidential pardon.

Snowden is one of seven leakers the Obama administration has charged under the Espionage Act, including WikiLeaks’ source Bradley Manning, whose court martial is ongoing. That adds up to more than any other American president in history combined.

“It is getting to the point where the mark of international distinction and service to humanity is no longer the Nobel Peace Prize, but an espionage indictment from the US Department of Justice,” wrote Julian Assange in a statement regarding Snowden Saturday. “…Trying to crush these young whistleblowers with espionage charges, the US government is taking on a generation, and that is a battle it is going to lose.”