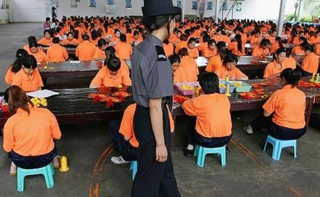 Coming all the way from unit 8, department 2 of the Masanjia Labor Camp in Shenyang, China, the letter written mostly in English read,

"Sir: If you occasionally buy this product, please kindly resend this letter to the World Human Right Organization. Thousands people here who are under the persicution of the Chinese Communist Party Government will thank and remember you forever."

The letter went on to describe 15 hour work days, no days off, and pay at 10 yuan per month ($1.61 US Dollar) if any. It also described the 1-3 year average forced labor terms without trial, and the large amount of Falun Gong practitioners in forced labor, a banned spiritual group.

Although the authenticity can't be totally proven, Sophie Richardson, China director at Human Rights Watch stated, "I think it is fair to say the conditions described in the letter certainly conform to what we know about conditions in re-education through labor camps."

Even more gruesome and largely ignored are the mobile execution vans that harvest prisoners organs on the way to jets to shipped and sold on the black market to the highest bidder.

After the Oregonian newspaper originally broke the story, they contacted the U.S. Immigration and Customs Enforcement about the note. Although it is illegal to import items produced or manufactured in a foreign country by forced labor under Title 19, section 1307 of U.S. Code, it continues to appear that the United States is not interested in stopping slave goods from reaching its shores.

Ironically, Army Regulation 210-35, which bears the name “Civilian Inmate Labor Program” refers to establishing and managing civilian inmate labor programs on Army installations within the United States. Even more disturbing is the 2010 army manual FM 3-39.40 Internment and Resettlement Operations that was leaked online this year that outlines plans for “political activists” to be "indoctrinated" by “PSYOP officers” into developing an “appreciation of U.S. policies” while being detained in prison camps inside the United States. Fort Leonard Wood Public Affairs director Tiffany Wood responded to the leak by saying that the document was not meant to be public and that the manual was for overseas, despite the manual referring to the U.S.

Sears Holdings Corporation, which controls Kmart, released a public statement regarding the letter from China:

"Sears Holdings has a Global Compliance Program which helps to ensure that vendors and factories producing merchandise for our company adhere to specific Program Requirements, and all local laws pertaining to employment standards and workplace practices. Failure to comply with any of the Program Requirements, including the use of forced labor, may result in a loss of business or factory termination. We understand the seriousness of this allegation, and will continue to investigate."

Yes it is, they are sending our jobs over seas paying cheep labor & not even paying them a days worth of work for one week! I agree with you on this. If we bought American made maybe they would stop? Just a thought but they are the NWO again... They will not stop untill someone some day can put a stop to this mess. We have to band together, We The People.

The world has changed, and we are now a global society. We are buying a lot of products that are from China, India, ect. where the labor laws permit a horrible work condition. The workers have no human rights, and often commit suicide, while at work. They see this as the only way out of working seven days a week, sixteen hours a day, and often without food. This is a severe human rights issue.