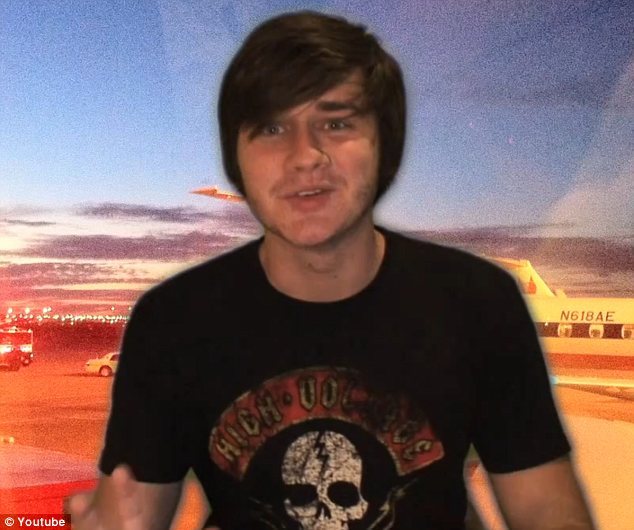 Will Norton was driving home from his school graduation when the tornado struck. His father desperately tried to hold on to his son as the Hummer H3 started to flip, but his seatbelt snapped and he went hurtling through the roof of the vehicle.

The 18-year-old had a YouTube channel called 'Willdabeast' where he posted comedy diary-style videos and had almost 1.5 million views.

Online star: Comedy videos on Will Norton's YouTube channel had over 1.5 million views

Mr Norton was due start a course in film production at Chapman University in the fall.

He had just graduated from Joplin Senior high school on Sunday when the disaster struck. Hours before the tornado he posted on Twitter: 'I'm graduating today.'

His sister Sara was speaking to their father on the phone as the tornado hit.

She told CBS News: 'We left about five minutes before them. We barely made it in the garage. Trees started blowing in. Tragedy: The eighteen-year-old was driving home from his high school graduation when he was sucked into the tornado

‘My dad called, he was talking to him. He was telling my brother, “Pull over, pull over”.

‘I heard the tornado whipping them around. I had a feeling they were flipping around in the air. It was just really scary. We just didn't know what to do.’

When the family got to the car, they had to cut the father from the car. The only trace of Will was his cell phone and graduation cap.

Miss Norton said her father has regained consciousness and has spoken about the horrific incident.

She said: ‘He said he had his arms around Will when they started flipping and Will's seatbelt snapped and he flew through the sunroof.’

Facebook pages have been set up by relatives of the missing and the dead to pay tribute to the victims of the tornado. 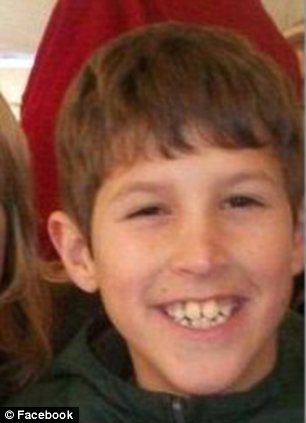 Tributes: Nine-year-old Zachery Treadwell, left, and Billie Gideon were killed by the tornado. Billie's grandson Dale described her as a 'sweet and caring' woman . 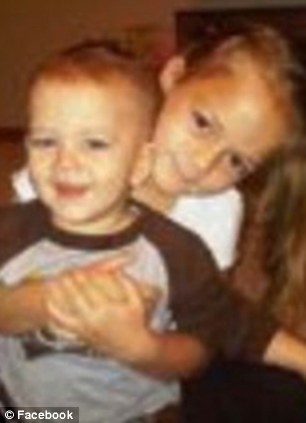 Victims: 16-year-old Kayleigh Teal, left, was working at the Pizza Hut in Joplin when the tornado hit. Brother and sister Hayze and Harli Howard also died

Those who have been confirmed dead include a young brother and sister who were killed along with their father.

On a Facebook memorial page, a family friend of Hayze and Harli Howard wrote: 'These sweet babies lost their lives along with their father... It's hard to believe... Praying for the families of the missing and deceased and for all of Joplin.'

Sixteen-year old Kayleigh Teal was working at the Pizza Hut in Joplin when the twister tore through the city.

On a website page appealing for help to find her, a relation wrote: 'They found Kayleigh, Sadly she did not make it. Rest In Peace Kayleigh.'

Also among the dead was Billie Gideon, who had worked at the Pentecostal Church of God in the city. 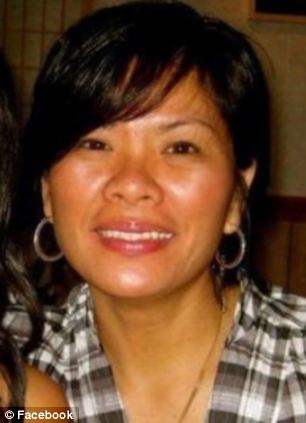 In memory: Grace Aquino, left, who was Filipino, and John Richey, were confirmed as dead

Her grandson Dale paid tribute to her on his photography blog. He wrote: 'Last night, my grandma died after injuries she received from the tornado destruction in Joplin.

'Grandma was always so sweet and caring. I have a few memories that really stick out that show her generosity.'

A relation of John Richey, who also died, wrote on a tribute page of those who lost their lives: 'Love you and miss you cousin! I'd give anything to see ya one more time...' 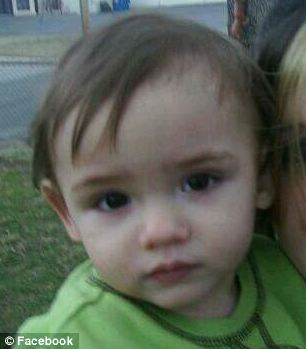 Lost: 15-month-old Skyular Logsdon became separated from his parents in the rescue efforts after the tornado hit Joplin, Missouri

The family of a 15-month-old boy missing since the tornado swept through Joplin are frantically appealing for help to find their baby who they became separated from in the rescue efforts.

Skyular Logsdon has been missing since both of his parents became injured when the storm struck on Sunday.

A Facebook group has been set up in the hope that they can be reunited with their son.

Skyular's aunt posted on Facebook: ‘My nephew Skyular Logsdon has been missing since the tornados came through Joplin.

‘We've had many tips, but no confirmation of anything yet. He has shorter hair now and this picture is about a month old.

‘The hospitals won't have his name on file because he wasn't brought in with his parents. Please call or text with any information.

‘Let's bring this baby home to his family.’

Skyular's relatives carried out a careful search of what was once his home, but all they could find was his dark blue teddy.

'We have searched every morgue, every hospital, every place we can think of,' said Rusty Burton, a step-grandfather to Skyular. 'I looked at every piece of this house I could.'

On a telephone pole close by, they found his red T-shirt and pants, torn and rain-soaked.

'It's all torn up. I don't want him to have been wearing this,' said relative Pamela Tate, sobbing as she gripped the tiny clothes. 'All I want is for him to be alive. That is all I want.' 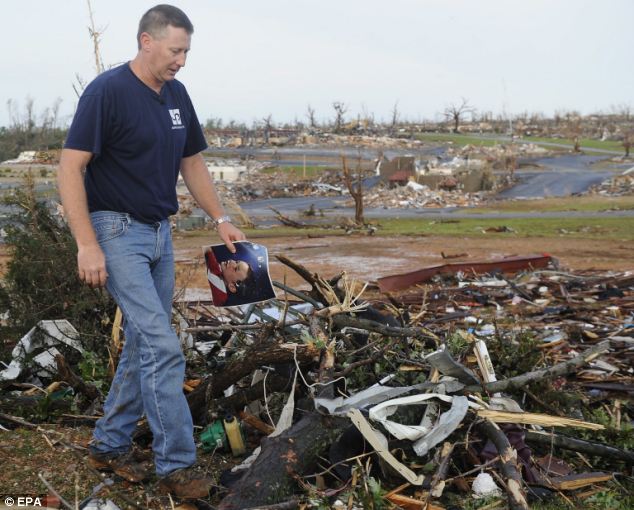 Searching: Frank Reynolds carries a photo of his 15-month-old nephew Skyular as he looks through rubble in Joplin, Missouri

I REPOSTED this to remind us, this could be us at anytime! Keep these & All of the people who where hurt, killed or their familys in Prayer. Some people can not even check to see if their Loved one is here dead because they are not allowed in to see the dead, last that I had heard & I know that is different in different areas. Some may be allowed to check, we keep getting New Updates from different places every day, every hour.

May God Bless Us All !