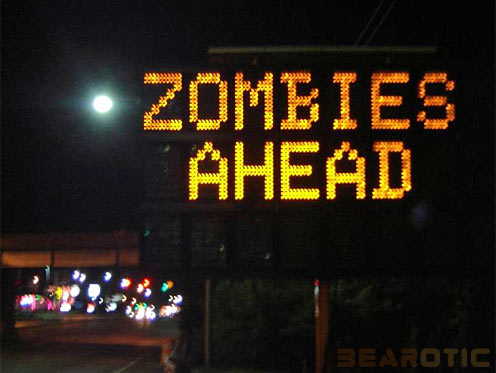 Recently we have been hearing a lot about, a zombie apocalypse.

There are two reasons why we may be hearing such news.

2) the powers that be, want us to believe in zombies

Zombies are suppose to be people that have risen from the grave, and have a hunger for human flesh.

I don't believe there has ever been a person who has risen from the dead, and goes around eating people.

I believe so called zombies are people suffering brain damage or some sort of insanity.

The classic zombie originated in Haiti, where a Voodoo witch doctor would poison someone with puffer fish poison. This would put them in a comer and they would appear dead. This person may then be buried in a crypt. Latter the witch doctor would revive them with a  antidote. However the poison had caused brain damage.

There have always been crazy evil people, and some serial killers have been known to be cannibals. Often tabloid papers will call these people zombies to make a story more interesting.

Nowadays a lot of so called zombies are people high on drugs. the drug methamphetamine, often called bath salts or plant food as been blamed for many so called zombie attacks.

But could we have a situation like in the film Serenity, where the stuff the powers that be are using to calm us down (aspartame, fluoride, and what ever in chemtrails) having the opposite effect on some people and making them more aggressive and crazy, like reavers in the film. So what we have are more like reavers that the Hollywood type zombies.

But them you have to ask yourself why the interest now. There was a exercise by the military on dealing with a zombie attack, and now they say there won't be a zombie apocalypse. So why are they messing with our minds when it come to zombies? Could they have plans on calling anti government protest a zombie attack, so the have a excuse to kill them.

The idea of the police having chain saws to attack protesters would make a good movie, but how close is that to reality.

Operatives to keep us from doing our jobs posting against the NWO.

Sorry I was a bit short of time when I posted it. So I just added a picture.

Yes I know zombies are just Hollywood creation. But you have to ask yourself why the media are making a issue about them.

You posted a post with out a picture? &  Zombies are not real just oppertives to distract everyone!